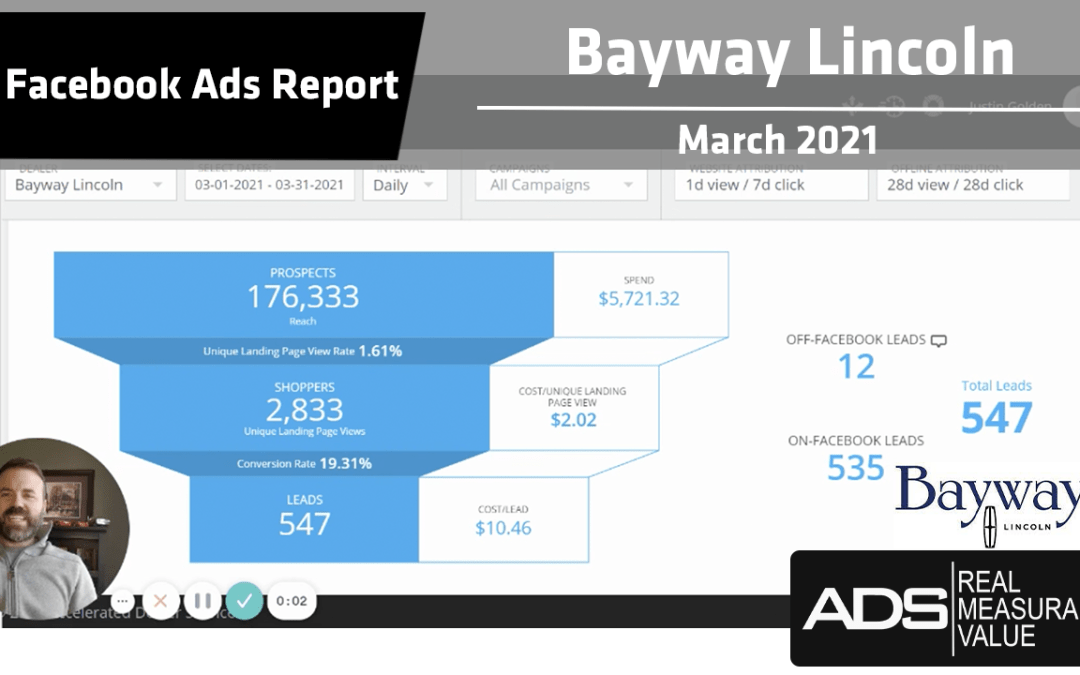 Hey guys, and happy April. Here’s our first review for our Bayway Lincoln ads, which launched in the month of March. So got off to a really great start. Had a conversion rate of almost 20% and a cost per lead of $10. So I honestly don’t think we could have done much better than that. A lot of the success came from our ads that were offering lease payments. So we had to rework it a few times, especially early on to make sure that they were compliant. I think we’ve got a good system now where we’re going to make sure we’ve got the right disclaimer, backed with some great ad copy. And of course, the artwork displaying the correct cars, but that was really a lot of success that we had for both of form submissions and Messenger ads.

We didn’t send a lot of traffic to the website, that would be your off-Facebook leads. Those are phone calls and web form submissions from traffic that was started on Facebook and then sent to your website. So our success really was on-Facebook and again, the bulk of it came from these lease offers that we created. So thank you for providing the Excel spreadsheet with some of those cars, for us to build campaigns around. More of the same, you know, here in the month of April is to take that success, but then this to keep the ads relevant by refreshing the ad copy,  getting new cars, you know, we’ve got to make sure that we’re not offering a lease or a payment on something that’s already sold.

So constantly refreshing those ads to maintain that really high conversion rate. If we can stay above 15% going into the summer, that would be awesome. So you guys have any questions, just let us know and real quick, sold data’s uploaded, which is great. So, for all the cars that sold the month of March, we can attribute 15 for people who saw and interacted with our ads at some point, which led to a cost per sold to $381. That’s a little high, I want to bring that down and I’d love to see it be below $300 for the month of April. We can do that by maintaining that really high conversion rate. And hopefully April will produce either similar or much better results than we did here in March. If you guys have any questions, just let us know. We’ll talk to you later.