Making Failure Work For You 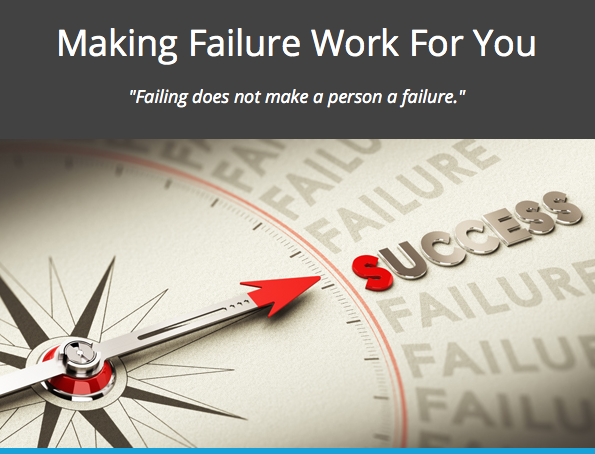 Many people think that those who are successful in business are lucky. Those of us in the know realize that LUCK is actually an acronym: Labor Under Controlled Knowledge.

When you combine LUCK with a great attitude, you foster an environment that is full of positivity. Creating a positive environment creates success because you’re working toward something you know will produce gain.

One of the most difficult steps to projecting positivity is acknowledging failure. We, as humans, fail. It’s just what we do. Not every situation is going to work out in our favor – so there’s a big difference between failing a few times and believing that future failure is simply what will happen, no matter what we do.

Failing does not make a person a failure.

Even failing over and over again doesn’t turn a human being into a ‘failure’. Likewise, failing once doesn’t mean you’re destined to do it in the future.

Sometimes we fail because we’re working on the wrong things. Paying attention to the wrong problems and focusing energy on the wrong people are huge problems in many workplaces. This is especially true in dealerships, where the constant intensity, motivation and push to succeed keeps us moving fast and sometimes skipping over the details that matter.

If you find yourself failing over and over again at your dealership, maybe you’re not the biggest problem. Maybe your systems, your motivations or hiring choices are setting you up to fail. Those are easy enough to get out of your way once you name the problem.

Let’s talk about how to get some of these things out of your way so you can sell more cars and make 2016 your most successful year ever!