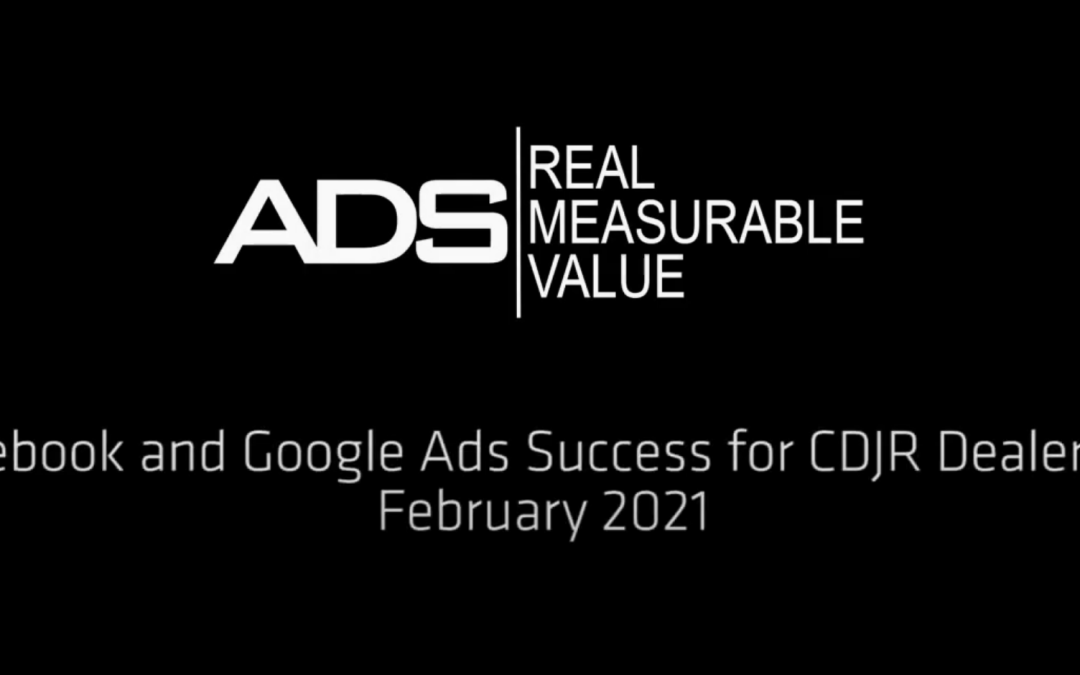 Hey guys, Justin here with ADS. The quick recap for the month of February, taking a look at both your Facebook and your Google ads, even though it was a shorter month, we still saw some great results and carried a lot of great momentum towards the end of the month into March.

Real quick, we’ll start looking at Facebook and see that our conversion rate stayed at around 20% just below, but it’s already bounced back a little bit here in March. Cost per lead stayed around $25 for the month. Great, on and off Facebook engagement and Lead Gen for the month. So these are really early indicators in the month for how things are doing. Before we can upload sold data, we want to look at engagement, see how many people are filling forms out and calling the dealership. And we really saw a lot of that spike towards the end of February, which was awesome.

Of course, we do have sold data uploaded now for Facebook and we can attribute 43 sold units to our Facebook ads for the month coming in under $200, a sold unit at $187.

Then to switch gears now and take a look at our Google ads. Ads spend was down as were our total conversions. Now some of that is attributed to this being a shorter month. Of course, still our conversion rate improved 14%. So we’re headed towards a 10% conversion rate hopefully soon. Impression share also stayed about the same, but up just slightly.

Click through rate improved almost 10%, which had been down a little bit. So it was nice to see some of these other metrics start to improve.

Had a ton of phone calls for the month of February to the dealer. Also some VDP lead forms, 32. Had quite a few chats started, 18, and then a few more general contact forms and even a service form.

A lot of used car traffic for the month, used cars continue to be hot. And with new car inventory being threatened here, going into the summer, I think that’s going to stay the same. I think we’re going to have a great used car year all around, so we will hold things steady there. If you guys have any questions about the month of February or what we’re doing in the month of March, just let us know and we’ll talk to you later.