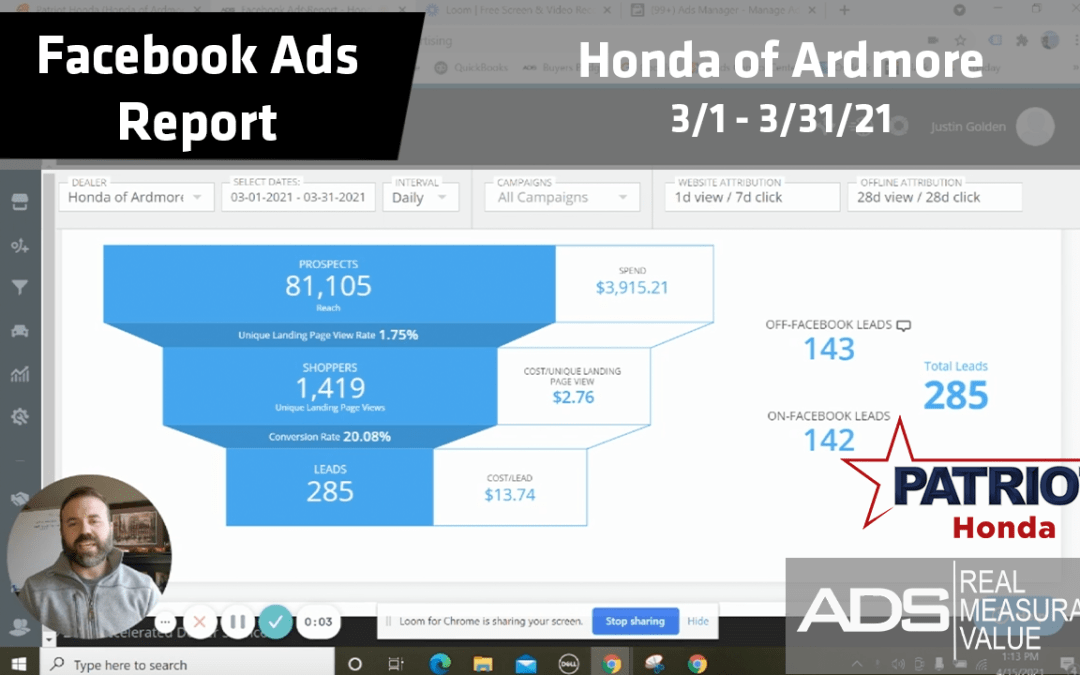 Hey guys, Justin here with ADS with a quick review of our March Facebook Ad campaign. So, we ended the month of February with kind of a high cost per lead. We were at $28 and our conversion rate was 15%, which is decent, but knowing that our lead cost was so high, we knew we had to get a higher conversion rate and redo some ads. So how we focused on some buyback ads that we had running and switched them up and created some lease payments based on the current incentives. And those really helped us quite a bit last month. So we improved our conversion rate from 15%, got it up to 20%.

Also dropped our cost per lead from $28 all the way down to below $14 in the month, $13.74. On-Facebook leads through our Facebook forums and messenger bot ads, produced 142 leads. So switching things up always helps. You know, partly because, you know, something’s not working, we’ve got to keep trying. We can’t just set it and forget and wait for the end of the month to do something. We’ve got to be really flexible in getting new artwork and ad copy up quickly.

Secondly, we want to avoid ad fatigue. We don’t want to leave ads up for too long because they’ll start to gain impressions on people that have just seen him too many times. And Facebook will actually start to not show them as frequently. So, new ad content has already been uploaded also for the month of April. So we’re just going to keep pushing new content, focus on available inventory and incentives that are out there in the market. Right now, it’s a great time to be pushing these things with stimulus checks being mailed out, we’ve got tax return season. So there’s a lot of good things going on in the marketplace, despite maybe a new car inventory shortage on some lots. I know used cars in particular are still really, really hot. So all in all, we made a lot of improvements in March and we should hold through April as well. Sold data uploaded for the car sold in March, there’s 29 people who bought cars, who saw or engaged with our ads on Facebook, which led to a cost per sold of $135. If you guys have any questions on what we did back in March or what we’re doing here in April, please reach out. We’ll talk to you soon.