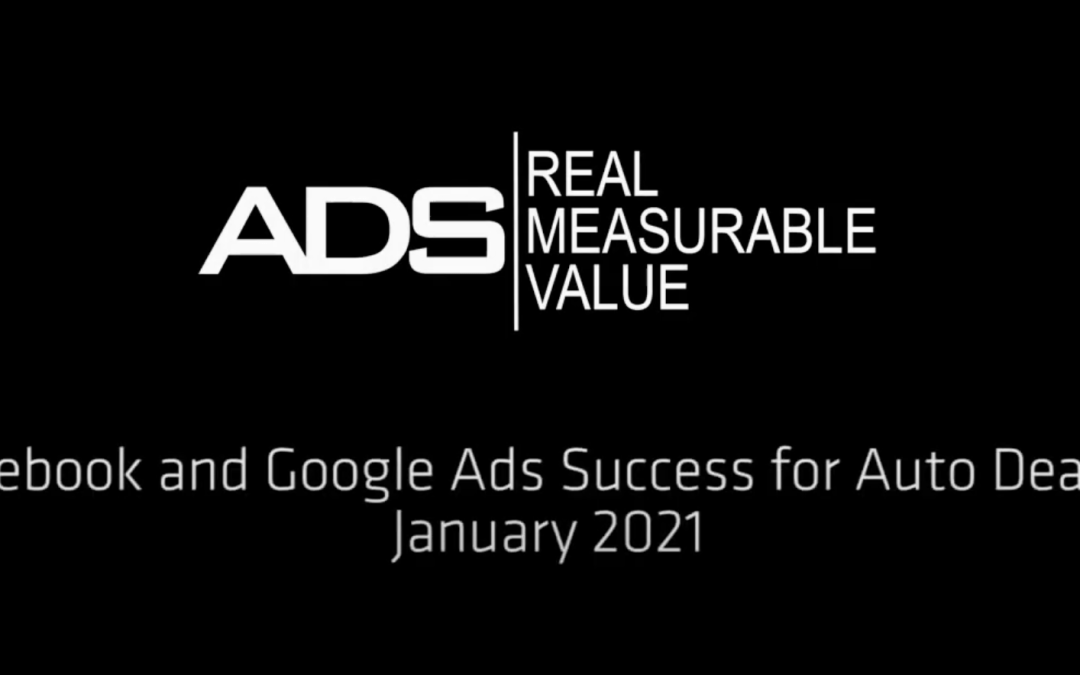 See how we helped this Car Dealership with these Facebook Ads Solutions and Google Ads Strategies.

We act as a true partner to our dealer clients, taking initiative to manage your Facebook Ads Account and Google Ads effectively to send you qualified leads directly to your CRM. We send out bi-monthly reports so you can know how your ad dollars are being spent. If you are a looking for a partner who delivers results over excuses, and who maintains solid communication with you and your team, look no further. Book an expert session, so we can share how we can help your Dealership sell more cars using Facebook Ads.

Hi guys, hope you guys are doing well and off to a great start in February. Real quick, let’s take a look at how we did in January for both our Facebook and our Google ads. It’s been a little bit more money, with the addition of our expansion, videos and ads in January.

Our cost per lead went up a little bit from December to January from 12 to $19. It’s still below the $25 that I consider to be high. Hopefully we’ll make some progress in February and start to bring that number down a little bit more.

Sold units: We had 61 in December, but more so we should get more, got that up to 79 events attributed to Facebook ads for the month of January.

So, a lot of this momentum we carried over into February, I think that our cost per lead will still stay a little high. I think we’ll stay below $25, but I wouldn’t be surprised if it stays around that $19-$20 range.

Our expansion ads are built to get the message out and build brand awareness. So they’re not going to be as effective as a true lead gen with a strong call to action, but we are blasting that name out there andgetting people to react and engage with those ads, which is awesome.

I’m gonna switch gears real quick and go look at our Google Ads for January. All in all a solid month, we increased our clicks by almost 30%, but we actually spent 1% less than we did in December. Now, our click-through rate and our impression share two numbers that I watch and care about very closely were both down.

I always want my search impression share to be, like I said, I’m trying to inch towards 35%, and I love it when my click through rates higher than, than 10%. But we took a step back on those two metrics this month. But if you look at our conversions were actually up 5%.

So, I’d rather tell you that we actually got more, uh, by spending less, which we did, even though some of my vanity metrics don’t look as pretty as I’d liked them too. So, conversion rate was down a little bit, but our cost per conversions down to $20 conversions were up about 6%.

We had a lot of phone calls. We had 44 lead forms submit from VDPs. We had 32 chats started. I think we had, nine generic, contact forms completed and then one vehicle finder as well.

So we beat, December, and we did it by spending less money, which is awesome. I’m still gonna pay attention to my click through rate and my search impression share numbers. But in February, if I get to, talk about better conversion numbers again, I’ll, I’ll take it.

So I hope you guys are doing well. If you have any questions about Facebook or Google, just let us know. And I’ll be sending a mid-month report here soon.