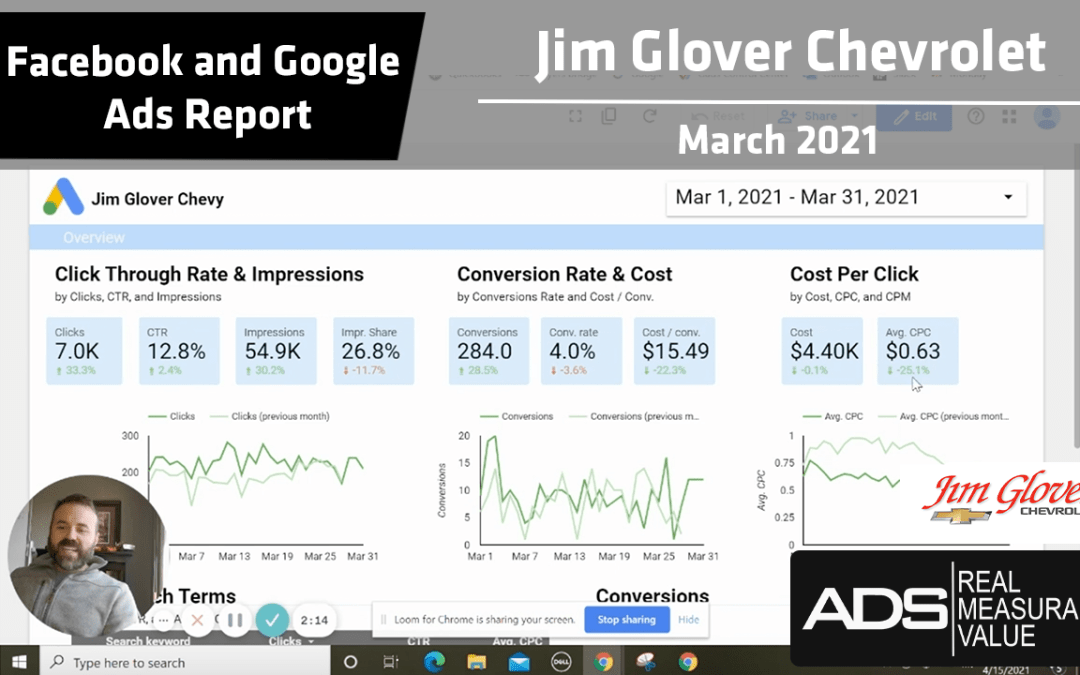 Hi guys, Justin here with ADS with a quick look at your March ads for both Google Ads and Facebook. So really great news on Facebook, our conversion rate continues to stay super high. So we’re putting new ads up all the time and trying to get our relevancy score as high as we can. The higher the score with Facebook, the more they’re going to show our ad. Obviously the more we show our ad, and as long as that content is good and relevant to the viewer, then the more likely we are to get a form submission or a message through our Messenger bot or people to go to your website, in which case they might fill out a VDP form or also pick up the phone and call you.

So a ton of leads drove down our cost per lead to almost $10, just below $11 right now for the month of March, it was $10.96. So all in all a great month and a long month for March. So it’s good to see that we did well, for all the cars that sold. We can attribute 57 to people who saw or interacted with our ads on Facebook, which led to a cost per sold about $161.

Switching gears over to Google Ads, also had a great month in Google Ads. So used car traffic is just hot, hot, hot right now. You know, as we know that a lot of the domestics, their new car inventory is dwindling and everybody’s kind of in the same boat. And now there’s kind of a pinch on used cars, but, there’s a lot of, lot of people out there looking for used cars. So traffic was up, our click through rate was up a little bit. Search impression share down again, now it’s around 27%. So my goal is still to get that as high as I can. We’re bidding on a lot of used car terms. And as people’s inventory for new cars gets slimmer, there’s going to be more competition for a used car keyword. So there’ll be more the more competitors at auction time, the lower our search impression share. So, 35% is still my goal, but it’s getting very competitive.

The good news for the month of March is that our conversions were actually up almost 30%, which is great. Drove our cost per conversion down 22%. And we did all that with spending the same of what we spent in February, just up about a 10th. Our cost per click also drops significantly just to 63 cents a click, which is honestly just really, really good. I don’t suspect that will last. I would love it to, you know, anything below a dollar of course is phenomenal, but to have it, 63 cents for a search campaign is just really, really good.

So a lot of phone calls from our ads, some 45 chats started and we had 45 E-Price form submissions, 12 availability. We had some general contact forms, we had three and then a vehicle finder, we also had three. So again, focus in April just to hammer home used cars as much as we can and get as much traffic to your website as we can at the lowest cost, which we did a really good job of in March and I’ll hope will carry over throughout the entire month of April. If you guys have any questions, reach out. We’ll talk to you later.